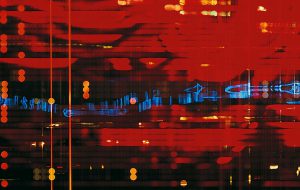 Almost ten years ago the researching ideas of interactive music and virtual musical space were materialized into creative and scientific project, which we called in a manner of modern epoch: EXPLAIN (EXPerimental Laptop INtercommunication). Per se, this is both an artistic experiment and a researching project. Today it is for 80 per cent a research and just about 20 per cent – the way to get a new musical experience. To gain this, we also developed the special musical software.

Our first aim was to study a creative potential of a performer and a composer in a new acoustic environment, as well as a coordination and collaboration in non-standard conditions. Later we realized wider artistic and scientific perspectives, and a large technical range of problems in connection between musical instrument, ensemble and performer relationships.

Initially the main concept was that every performer can fill all available sound space equally to other performers. Moreover, the placement of sound elements is limited only by sound system capabilities, as for the performer’s fantasy –  it is potentially unconstrained. As a result, a complicated interaction of different interpenetrated sound spaces is born, as every performer not just takes part in a shared picture of world-formation, but creates his/her own sound world.

Realizing, that it is impossible to grasp the immensity, in our project we came to three poorly explored musical spheres: virtual musical space, network musical performance and interactive music.

Project software are based upon client-server architecture. It let us potentially make experiments in the field of “remote” network musical performance. But today, when virtual musical space problems are still the most important, all connections between performers are “local”. Musicians – each one with his/her own laptop – connect to the server via wireless network. The server joins all client’s processes together and plays back the sound result to “real” acoustic quadraphonic system, as well as performs synchronization and conducter’s functions.